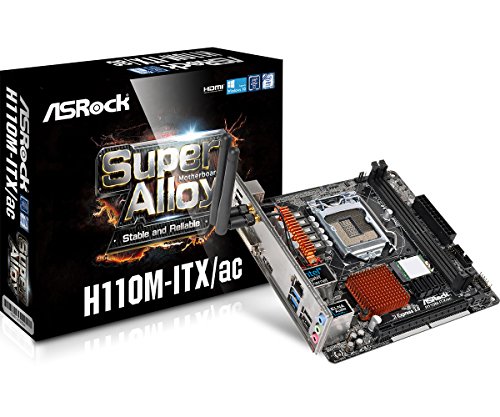 * Product prices and availability are accurate as of the date/time indicated and are subject to change. Any price and availability information displayed on Amazon.co.uk at the time of purchase will apply to the purchase of this product.

* PCPartPicker may receive compensation for purchases made at participating retailers linked on this site. This compensation does not affect what products or prices are displayed, or the order of prices listed. Learn more here.

I've never thought of ASRock as being very good, but I was pleasantly surprised by this mobo. After I finished installation, it worked great, and the wifi was actually quite fast. However, I have a few gripes with the installation.

The main issue is with the installation of the wifi. There is an manual booklet with the mobo, but it says nothing about the wifi. I figured out how to do it though. For the record, you take the wires with the gold things at the end, and plug it into the tiny gold ports on the wifi module, which you can find using the diagram of the mobo in the manual, and then put the other side through the holes in the IO shield and secure it with the nuts.

The issue with the wifi installation for me wasn't the lack of instructions, however. It was that it was EXTREMELY difficult to plug the cables into the TINY gold ports on the wifi module. It took me a good 15 minutes and a decent amount of force to plug both in, and that's with the motherboard out of the case and no other components installed If you have a fully assembled system and the cable came out somehow you'd probably have to disassemble a bit to get it into a good enough position to plug them back in.

That was my main gripe with the board, but I also had some strange issues with the CPU fan. The custom curve controls were acting very weird for me. Whenever I set the fan speed to below 50%, it would turn off (surprisingly, at idle the temps were still about 50 with the fan off), and when I turned the speed over 50% it would jump to about 2500 rpm, which is quite loud. The fix is to go into advanced mode in the bios, then manually change the CPU fan mode from "auto" to "4-pin". Then it worked as expected.

All that being said, the mobo worked great after installation. The BIOS is nice and easy to use, it boots quickly with Fast Boot enabled in BIOS, the wifi is fast, and the logo you see on boot isn't gimmicky and weird like on MSI and Gigabyte.

from completed build Lil' Mike : The Budget Build That Could

Got it for 39.99 with -$30 Combo Discount at Micro Center. I really like this board for the price of 39.99. It has Bluetooth, WIFI, and the PCI-E bracket is really neat. The colors are ugly but what more can I ask for? The UEFI BIOS is clean and smooth; it even has four settings for the CPU Cooler fan speed.

Cheapest ITX motherboard I could find. I had to buy a Skylake CPU, flash this mobo's BIOS, and return the CPU to make the H110M compatible to my Pentium G4560. Was a bit of a hassle but it was definitely worth saving $50 that I would've spent if I went for the H270M, the cheapest Kaby Lake ITX motherboard that was out at the time.

I didn't like how the antenna cables need to be attached to the WiFi card on the board. It took me a good half hour to do so because of my fat fingers and fear of breaking anything. The antennas are very hard to screw in and they still stay a little loose just outside of the IO shield.

Other than the hassle to flash the BIOS with another CPU and the awkward installation of the cables and antennas to the WiFi card, this is a great motherboard and the cheapest for ITX builds.

from completed build For my Batgirl

Zero conflicts, pretty barebone but gets the job done for a simple system. I've had a couple ASRock boards before and they were pretty good.

Overall a very decent board at a very reasonable price. It has plenty of USB 3.0 ports on the back, USB 3.0 and 2.0 headers, and comes with a WiFi/Bluetooth card all for right around $70. It's not a high end board but it's great for general uses. I have this board in my HTPC/Plex server and it's great. Simple UEFI which looks great, and advanced UEFI for advanced users. Would buy again if I need a cheap 1151 board with WiFi

This mother board is not in the highest price range but does its job well. The closest thing to a problem this motherboard has given me was the struggling i had to do to connect the built in wireless card to the receivers. Other than that it was easy to get the drivers and has not had any problems while running

Great motherboard with WiFi and Bluetooth. Only gripe is that the WiFi connectors are super hard to get on.

Use only 1 wifi antenna. And dont punch the hole in the I/o shield. 1 antenna is enough unfortunately I broke the other one

Great little board but as others have mentioned the lack of documentation makes me take away a star. Having never done on board WiFi it was really frustrating to have nothing in the manual on how to hook it up. Luckily i found something on Tom's Hardware and i was able to figure it out.